We spoke with Malloy about what lead her to a career in real estate, her involvement within ULI, and delivering her biggest project to date during a pandemic.

While earning her MBA at Georgia Tech, Malloy Peterson took part in a real-world exercise that would change the course of her career. She and a team of classmates were asked to evaluate what they would do with an old warehouse property, which is now home to a gymnastics facility and other tenants, on Collier Road. They were competing against other MBA students in the NAIOP University Case Study Challenge.

“It was so real world, I loved it,” Peterson said. She also noted the class, held in the evenings, hosted many Atlanta commercial real estate CEOs and leaders. She was inspired by meeting executives from Pope and Land, Dewberry and other companies. Though she had an undergraduate degree in finance and work experience at Morgan Stanley, she was looking for something more creative. She was inspired by commercial real estate, and, specifically, development, which became her career goal.

She graduated during a real estate lull, and though she interviewed for real estate jobs, ultimately did not land one. She took a job in the mergers and acquisitions department of a large public technology company. After a year, some of the real estate firms were hiring again and came calling. She chose Carter, where she held several positions and spent a decade working on projects including mixed-use property The Banks in Cincinnati, as well as on the early stages of Carter’s Summerhill redevelopment by reimagining Turner Field, an 83-acre mixed-use project in downtown Atlanta, with Georgia State University as the anchor.

During that time, she reached out to Barry Branch, who had been named the Robert H. Ledbetter Senior Professor of Real Estate at Georgia Tech. She wanted to be involved in the real estate program that had ignited her own passion. She helped with various classes at Georgia Tech, including leading a real-world exercise about Turner Field.

Selig Enterprises: Working on The Works 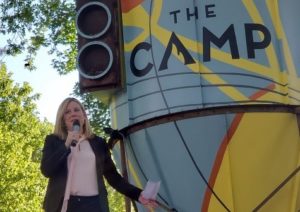 In 2017, Peterson joined Selig Enterprises, as senior vice president. Her biggest focus has been on developing The Works, an 80-acre adaptive mixed-use development in Atlanta’s Upper Westside. The vision for The Works is “distinctive retail and dining, imaginative experiences and inspired gathering areas in an interconnected environment,” all while preserving the character of the area’s industrial buildings. The masterplan comprises 350,000 square feet of retail and entertainment, 500,000 square feet of office space, 500 residences, 200 hotel rooms and 13 acres of greenspace.

The first phase of The Works opened this year to great acclaim. Peterson considers The Works her biggest professional success — for several reasons. First, she is proud the team delivered a top-tier product during the pandemic.

“Our first retail tenant was scheduled to open in April of 2020, the week of the start of the COVID lockdown,” Peterson said. “We had a steady string of tenants lined up to move in during the months following. We had worked three years to get to this moment and everything around us just stopped.  However, with the support of leadership at our highest level, our team kept our heads down and remain focused on advancing The Works and those things we could control with the same sense of urgency we had at the onset. We committed to be the first development in Atlanta ready to open right out of the gates when the pandemic abetted.”

The plan worked; there are now 22 tenants open and operating.  This includes a 32-stall food hall, Fox Bros BBQ, Dr. Scofflaw’s Brewery, Ballard Designs, and many others.

Peterson said she also is proud that The Works is a true community asset and of the discipline, the entire team showed in sticking to the original vision for The Works. They did not make compromises or take shortcuts.

When asked about learnings so far in her career, Peterson said she has learned that you have to make your own luck in real estate. “In real estate, some of the most celebrated or well-known deals or developments have come about as a result of an owner having a property ready for that one truly special ‘perfect’ user,’” she said. “It takes years of work, sometimes even decades, and teams of people to have all of the pieces in place to land a substantial or generational user. The land has to be located and purchased and the development has to then be zoned/entitled, planned, designed, and, in most cases, financing has to be in place as well.”

She added that even after properties are open, owners must continue to invest in their vision. “To have all of that take place, a leader must commit him or herself to that vision and be unyielding in its execution to preserve its true essence,” she said. “At the same time, he or she must think progressively to maintain the development’s position as a top destination in the future.”

ULI: An action-oriented organization for developers and practitioners

Peterson got involved with ULI because it is an “integral part of the development community.” The Urban Land Institute has more than 45,000 members globally – and roughly 1,500 of those members reside here in the Atlanta region.

She added: “It is not just a networking organization. It is serious business. ULI tackles important issues.”

Peterson, who currently serves on ULI Atlanta’s Livable Communities Council (LCC), said it is a good fit for her personality. “I am very action-oriented, and so is ULI,” she said. Specifically, the LCC is focused on engaging for impact, and members seek to serve not only as thought leaders but also as practice leaders of responsible development.

When Peterson is not working, she is busy raising two sons, who are 15 and 13. She also likes to read non-fiction and listen to podcasts, especially true stories from history or current events. She’d like to write her own book someday, and she has a few early drafts going.

ULI Atlanta is so pleased to share the appointment of three members to leadership positions in the Americas and globally for ULI.