We spoke with Lassiter about the continued success of Bayer Properties as well as her passion for sustainability, becoming a ULI member and giving back to her community in Birmingham, Ala.

There is a lot of buzz surrounding Libby Lassiter right now.

When she stepped into her current role as co-president of Birmingham-based Bayer Properties earlier this year, the commercial real estate world took notice. Following a leadership transition two years in the making, Libby’s half of the dynamic, female duo (alongside co-president Jami Wadkins) provides support to Bayer employees while delivering places that improve the quality of life in the communities Bayer serves. The leadership team has simplified their mission to a simple statement: “creating places people love.” 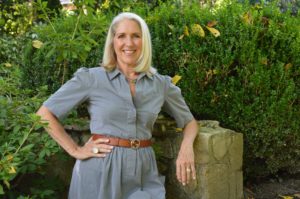 “Some of my favorite aspects of ULI are the people I am getting to know and learning about the fascinating evolution of retail and CRE.”

In the months since, Lassiter has been named one of Birmingham Business Journal’s Women to Watch and Bayer has stayed in the news with a bevy of project announcements and awards. At ULI Atlanta’s 25th annual awards ceremony in September, Bayer took home the Alabama Development of Excellence Award for the $70-million, mixed-use redevelopment of the Pizitz building in downtown Birmingham.

Her career isn’t the only buzz. In the backyard of her home in Birmingham are nine beehives — and growing.

“A few years ago, my daughter and I spent time researching ways we could have a positive impact on the environment from our home. We landed on the issue of the decline of the honeybee population nationwide, and how keeping hives could help support these invaluable creatures,” said Lassiter. “I took a beekeeping course at the Birmingham Botanical Gardens and we started with two hives in our backyard.”

Now her husband and daughter maintain the hives and have created a small family side business called Moonstruck Apiaries. Meanwhile, Lassiter continues to cultivate her passions for the environment, thoughtful land use and giving back to Birmingham in ways both big and small.

Busy as a Bee

“Guy Dorey was such an incredible motivator and he taught me about the world of sales — so much so that my biggest client, a Texas developer, actively recruited me,” she said.

That was during a boom cycle in Atlanta commercial real estate, and before long, Lassiter made the switch to high-rise office leasing training with Ben Carter at The Vantage Companies.  “The opportunity to become a partner and be an owner of CRE really appealed to me,” said Lassiter. “Unfortunately, shortly thereafter the market just cratered, so neither happened — but I did learn the real estate business and working with Ben was like gaining a dual master’s degree in leasing and development.”

She also met her husband at Vantage, and together their careers took them up the East Coast working with the who’s who of real estate, from Carter & Associates in Atlanta and Jacksonville, Fl. to the Rubin Organization (now known as PREIT) in Philadelphia, Pa. From there, Lassiter was offered an opportunity with General Growth Properties (GGP) and eventually moved to their home office in Chicago for a 10-year tenure. She started in leasing, then moving to a regional leasing manager to a Vice President role, to Senior Vice President of asset management roles in two divisions, and eventually head of re-development. “It was an absolute vertical career curve for me,” she said, “and I am forever grateful to the leaders of GGP for all the opportunities to learn and grow.”

Then, the move to Bayer Properties in 2005 brought her back to the South — and with her came a keen sense of both the similarities and the differences between markets. “The local flavor of a property is the icing on the cake and typically what makes it special,” she said. “But region to region, the fundamentals are still intact. It’s not any easier to do business in the Southeast than it is in Denver. You’ve still got to dig into the market to appropriately merchandise your projects and cultivate relationships with retailers and brokers.”

Building on the stellar portfolio that Jeffrey Bayer and David Silverstein created, today the company has a more than 10 million square feet of retail and office properties. In addition to The Pizitz, Bayer has been the developer of several landmark projects including The Summit at Fritz Farm, a multi-dimensional mixed-use development that opened in Lexington, Ky. in 2017 and is a finalist for the upcoming 2019 ICSC North America Design and Development Awards.

“While combining five different uses in one project was one of our bigger challenges, I also see The Summit at Fritz Farm as one of our team’s greatest successes,” said Lassiter. “We utilized so many people and skill sets to deliver a fantastic mixed-use project from the site plan, architecture and ambiance, to the mix of uses and the merchandising.”

Lassiter attributes much of the company’s present success to this approach of collaboration and strategic moves since the 2008 downturn.

“We buckled down and instead of reducing leasing staff, we hired and trained more talent to work all of our projects,” she said. “While development had dried up, Bayer did the opposite of many other companies and seized the downturn to expand the portfolio focusing heavily on the third-party business. We were also able to recapitalize our loans on almost all of Bayer’s projects, not giving one back to a bank. There was tremendous focus on keeping the tenants we had in place as well as taking risks on locals.”

More than a decade later, Lassiter believes Bayer is stronger than ever with major mixed-use projects in the pipeline and expansion to new markets in Oklahoma and Ohio, despite constant challenges in the industry.

“We’re facing a different challenge as retailers are having to reinvent themselves because of the internet and Amazon which is putting pressure on rents. And then again, the mission is not all that different. We are still focused on finding relevant and first-to-market retailers who provide great customer service, embrace on-line and bring something interesting to the table.”

Bayer’s enduring success can also be credited to its evolving company culture. “Our senior leadership is increasingly focused on our employees,” said Lassiter. “Richard Branson put it best: ‘Clients do not come first. Employees come first. If you take care of your employees, they will take care of the clients.’ And that is exactly what’s happening with two million square feet of recent additions to Bayer’s portfolio.”

In line with this approach, Bayer is preparing to relocate its headquarters to a historic building in Birmingham’s edgy Five Points South neighborhood. “We’re creating a very hip environment which we know will really energize our employees,” she said.

Likewise, Lassiter added that Bayer continues to invest in training and new technology for its team, recently going almost 100% paperless and cloud based. “The success of our people in their new roles is truly my greatest success. I love being able to delegate and trust that the job is getting done and done well. Giving our people autonomy and watching them handle their projects so nicely is most rewarding,” she said. “I am very optimistic about our future and the next evolution of Bayer Properties. Creating more diversity at the corporate and property level over the next five years is something I am also very focused on.”

Since stepping into her role as co-president, Lassiter has expanded her involvement in civic organizations, including REV Birmingham, a city-sponsored group focused on urban revitalization. She is also raising funds to establish a cultural center for Common Thread, a Birmingham-based 501c3 whose mission is to bring new businesses, jobs and hope to impoverished areas of Birmingham.

Lassiter recently joined ULI as a member of the Atlanta chapter. (Note: Birmingham members currently fall in its geography while taking steps to become a distinct satellite group.) She was first exposed to the organization after attending the Spring Meeting in Nashville as a guest of the CRC Gold Council, thanks to an invite from one of Bayer’s clients.

“I had heard about ULI of course, but I thought it was a smaller, senior level network,” said Lassiter. “When I showed up in Nashville, I was blown away by the scale of the convention. I knew a lot of people and met many others who are my contemporaries.”

Shortly thereafter, Lassiter was invited to join the Gold Council and attended her first meeting as a member this fall in Washington, D.C. “I went to more sessions, was a little bolder in networking and really enjoyed it,” she said. “Some of my favorite aspects of ULI are the people I am getting to know and learning more about the rapid evolution of retail and CRE. Sure, there is much information available through other resources, but ULI has brilliant, leading-edge speakers that are clearly ahead of the curve.”

At one of the sessions, she struck up a conversation with the person sitting next to her. “He happened to be Steven Burke of Boston-based contractor Consigli and told me about Building Green, an industry group whose mission is to bring sustainability practices into the construction field,” she said. “Now I am committed to be an influencer with some of our contractor friends in Alabama, to convince them to become active in Building Green and to see the value in establishing sustainability practices.”

In addition to these groups, Lassiter is involved in the Birmingham-based sustainability group “Faith Meets Business: Climate Solutions for the Common Good,” which will host its first community event on the climate crisis in February 2020. “Our mission is to bring faith-based organizations together with business leaders to show how the two can work together to educate and bring forth positive and practical initiatives to combat climate change,” she said.

With any free time left on her calendar, Lassiter enjoys getting outdoors and finding other ways to appreciate the environment, from attending the Wild and Scenic Film Festival at the Sidewalk Cinema in The Pizitz, to stand-up paddle boarding.

“Birmingham is at the foothills of the Appalachian Mountains and has beautiful rolling terrain, which can be challenging for development and likely contributes to why our city isn’t overbuilt,” she said. “We embrace our history and many people outside of Birmingham do not realize how this city has evolved for the better. Simply put, there is a terrific, vibrant quality of life here and it’s a great place to be.”

It doesn’t get sweeter than that.