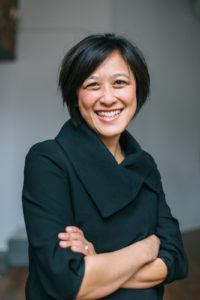 We spoke with Ong about her journey from Malaysia to Australia to Atlanta, her dedication to civic innovation and what keeps her moving forward.

Cherie Ong has a talent for reinvention. A self-proclaimed eBay enthusiast, she enjoys the hunt for vintage pieces she can purpose in unexpected ways.

It’s clear that same talent for reinvention carries over to other aspects of her life, considering the Australian expat has moved across continents and completely changed careers.

As the co-founder and principal of Good Places, Ong applies her skill for capitalizing on untapped potential when she looks at say, a 125-year-old church. Ong has found an avenue to use her talent for sparking civic innovation — on Auburn Avenue, to be exact. Through her work on this historic street and beyond, Good Places is helping revitalize urban communities around the city by investing in and developing affordable spaces for social impact organizations while delivering solid financial, social and environmental returns.

What makes a place “good”? Look no further than 340 Auburn Avenue. Located just steps from the birthplace of the Reverend Martin Luther King, Jr. and his pastoral home at Ebenezer Baptist Church, the first property in Good Places’ development portfolio is testament to its unique approach to real estate.

The restored two-story brick building opened in May 2018 and is home to tenants including a co-living concept called the Guild, a coworking space called Remerge and Atlanta Breakfast Club, a chicken-and-waffles joint that serves ethical coffee and has been ranked No. 1 on Yelp.

Most importantly, the mixed-use building is more than the sum of its parts. Good Places named the development “The Awethu House” which originates from “Amandla! Awethu!” and translates to “Power to the People,” a popular rallying cry in South Africa during the days of resistance against the apartheid.

“We were very deliberate in picking this to be our first development and a demonstration project,” said Ong. “Our company is 100% mission driven, and we’re very passionate about social impact. We work with nonprofits, faith-based or mission-based organizations to help them procure and develop land, so the whole narrative of the Civil Rights district made a lot of sense for us to start there.”

Ong’s definition of a “good place” is informed by a wide world view. Originally from Malaysia, Ong spent her young adulthood in Australia after her family moved to the Land Down Under when she was 15. After studying for and launching a career in corporate finance, Ong fell into something she was more passionate about: helping people.

“I ended up going to seminary — which is a totally different story,” she said with a laugh. From there, she returned home to Australia to work with various nonprofits and mission-based organizations, including World Vision Australia, on a strategic level to improve their business models and social enterprise initiatives.

While at seminary, Ong also met her husband, who is originally from Rome, Georgia and the impetus for her family moving to Atlanta eight years ago. “We wanted to be closer to his family so our kids could be closer to their grandparents,” she said. “When I moved, I honestly didn’t know a soul here and didn’t really ‘do’ real estate.”

That didn’t stop Ong from trying — and with enthusiasm. Around the same time as her family’s move to the United States, one of her friends based in Hong Kong was setting up a real estate investment and development company in Atlanta to take advantage of the home foreclosure market. When he asked her to run the fund and spend a couple million dollars to purchase properties, Ong replied “Sure, I can do that!”

One Thing Leads to Another

“It had kind of snowballed a little,” she said with another laugh. “The experience gave me a really good perspective on how real estate affects communities in general. I realized how essential real estate and the notion of ‘place’ is to the fabric of mission and impact.”

Ong ran the fund for about five years. One of the brightest highlights from her time as director and U.S. representative for The Creations Group was transforming the M. Rich Center for Creative Arts, Media & Technology from an empty 100,000-square-foot building adjacent to Five Points MARTA and Underground Atlanta, into a vibrant hub for South Downtown.

“I took a whole different approach to real estate because number one, I didn’t know any better and number two, I come from a community-development background,” Ong said. “We never put a ‘For Lease’ sign up, we didn’t go through CoStar, and we didn’t really use brokers. We just talked to the community, then brought in entrepreneurs and businesses who wanted to grow in the neighborhood and help revitalize it.”

Within a few years, the M. Rich Center was a thriving incubator for 34 socially minded businesses, 75% of which were minority owned, and it spurred a renaissance for the surrounding neighborhood. Now home to the Center for Civic Innovation, the space continues to serve as an open campus for social changemakers.

In 2016, it was time for the fund to cash in. “The investors were based in Hong Kong and at the end of the day, they didn’t have a strong relationship with the local community,” she said. “It can be heartbreaking when motives aren’t aligned.”

The process motivated Ong to seek out a different way to do business: aligning the owners and capital with community objectives from the beginning. Ong said she would have just joined someone else, but didn’t see a lot of this or anyone doing it really well in Atlanta.

Instead, she teamed up with a former mentor and the co-founder of Ethical Property Australia to create Good Places, the first affiliated member of the International Ethical Property Family in the U.S.

As an Aussie with an American accent, Ong likened herself to Dory from the popular Disney Pixar film “Finding Nemo.” The character’s sunny disposition and famed mantra “Just Keep Swimming” are also apropos to Ong’s outlook. Laughter punctuates Ong’s sentences, and her cheerfulness is tangible, even from the other end of a phone call.

That isn’t to say Ong doesn’t face her share of challenges. “One of the biggest problems I encounter almost on a daily basis is the tension between making money and doing good,” she added. “People don’t like to mix the two, but once you help them understand they can do both, it’s not a conflict. It’s actually possible. It’s hard work, but meaningful work.”

Not to mention, she moved to a new country, launched a new career and is a working mom to two preteens. “Most people only have to deal with one or two of those,” she said. “There was a really big learning curve, but now it’s just par for the course.”

Ong continues to find joy in spite of the obstacles and by choosing to celebrate little victories along the way. “Small successes are the things that keep you going,” she said.

To lighten the load, she also has surrounded herself with like-minded people on Good Places’ Board of Advisors, including Kyle Reis, a fellow ULI Atlanta Board Member and principal in the Urban Planning studio at Atlanta-based design firm Cooper Carry.

“I bump into a ton of passionate landowners, but also people like Kyle coming out of the woodwork,” she said. “I’ve had maybe four or five architects who have offered to do work pro bono because they care so much about wanting to see a piece of property tend to something good for the community.”

Her involvement in ULI has also greatly widened her professional network and introduced her to many partners — what she calls a “priceless” resource for a small business like Good Places.
“ULI has been awesome,” she said. “I have to give credit to Seth Weissman from The Weissman Group. He was a lawyer we used on one of their deals and a former board member of ULI Atlanta. When he saw what I was doing in South Downtown, he recommended for me to join the board before I was even a member. It was a real privilege and that is how I joined ULI.”

Ong added that people may be surprised to learn there is an eclectic mix of non-traditional people in real estate who are doing the work because they care.

On the local level, Ong’s focus right now is an Accelerator Program for an Impact Development Pathway, to build out a pipeline of nonprofit, landowner-driven projects. Good Places is rolling out the program in partnership with Local Initiatives Support Corp (LISC), the largest Community Development Financial Institution (CDFI) in the nation with programs in New York and California’s Bay Area.

“There has been some really great collaborating with them, learning how they work with nonprofit landowners to build affordable housing,” she said. “In Atlanta, our program will have about seven participants who collectively own a huge amount of land with unlocked potential. The goal of this pilot program is to help them create a sustainable development plan and put together the partners to help them do it.”

Looking ahead, Good Places aims to develop a model out of this program, setting up demonstration projects and hopefully drive more scale in how we equip landowners to really pick up their game in terms of community impact. Ong is motivated to move quickly, as she knows firsthand from living in Melbourne, Australia how quickly gentrification and a crisis of affordability can unfold within a very short timeframe.

When she is not working, Ong enjoys eating good food, having friends over for a meal, baking desserts and spending time with her family. And of course, there is the eBay shopping addiction for vintage items.

Some of her favorite finds are the original 1960s sinks in bright hues of blue, yellow and green that have been installed in the micro-units at The Awethu House. While much of the units’ interiors are modern and the spirit of the place is full of hope for the future, the retro touches serve as a reminder of when the building was actually built and all that came before.

“I feel like we were the first new development on this part of Auburn Avenue in decades,” said Ong. “I don’t know what the future looks like, but I’m just hoping we can be part of whatever evolves.”

Good Places catalyzed the initial envisioning and funding strategy for redevelopment at Wheat Street Baptist Church, including a 25,000-square-foot Education Building just across the street from The Awethu House. The company has also been working with a non-profit owner on Edgewood Avenue, just one street away.

“We’ll never be able to claim the history of the churches who have the legacy of Civil Rights, and we’re not trying to take away from that,” she said. “At the same time, we hope to be a catalyst for the next generation. I’m super excited to be part of this ecosystem of people trying to do good.”

Ong may have been born and raised on the other side of the world, but she said she feels she is at least half-Atlantan by this point. Our city is certainly lucky to have her here.