Since graduating from ULI Atlanta’s inaugural CFL class in 2010, Mack has remained involved in various capacities, whether helping to plan program days, interview candidates or just being a general advocate of the program. Now as the 2020 class prepares to kick off next month with 34 of region’s rising stars, Mack is taking his involvement to the next level as Chair of the 11th annual program. 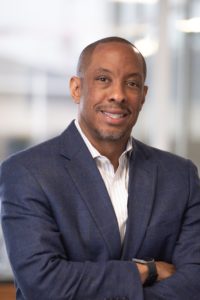 As the esteemed leadership program enters its 11th year, Mack reflects on his experience in the inaugural class, how the program has evolved and his plans as the new Chair.

As the landscape of Atlanta’s real estate has exponentially evolved in the past decade, so have the industry’s local leaders. Consider Keith Mack, Director of Development Services at Regent Partners, for example. Since joining the Atlanta-based real estate development and acquisitions company in 2006, Mack has taken his career to new heights. His impressive list of accolades includes management of the interior construction for more than $20 million worth of tenant improvements for a plethora of clients in several buildings that Regent Partners either owns or manages, as well as the development management of the $245-million, 3344 Peachtree/Sovereign building in Buckhead and the $70 million dual branded Hyatt hotel property in Charleston, S.C. He is currently working on major hotel projects in Savannah, GA. and Atlanta, GA.

He credits his career success in part to his involvement in ULI Atlanta, particularly the nonprofit’s Center for Leadership (CFL). A nine-month program cultivating leadership and life-strategy skills among 30-plus diverse individuals in the real estate and land use industries, CFL is designed to guide the responsible development of the region and strengthen connections among organizations that influence local development.

Since graduating from ULI Atlanta’s inaugural CFL class in 2010, Mack has remained involved in various capacities, whether helping to plan program days, interview candidates or just being a general advocate of the program. Now as the 2020 class prepares to kick off next month with 34 of region’s rising stars, Mack is taking his involvement to the next level as Chair of the 11th annual program.

Mack of All Trades

Some may be surprised to learn Mack didn’t begin his career in development. He received a Bachelor of Science degree in Architecture from the University of Virginia, then a Master of Science in Building Construction from the University of Florida, where he studied estimating and project management. “I realized at the end of my architecture education that I didn’t necessarily want to practice architecture,” Mack said. “Instead, I wanted to find a way to use what I learned and advance it, looking at buildings through a lens that wasn’t strictly design-focused.”

A job interview with a construction contractor brought him to Atlanta in 1994. Then, after a few years in the market, Mack realized his real passion was for development. “At the time, developers weren’t necessarily interested in hiring design- and construction-focused people,” he said. “Now, I think every developer has one or two of those people on their staff, but at the time, they were looking for more people with experience related to finance.”

In 2001, Mack earned his Master of Business Administration from Georgia State University to cover his bases and make the jump. He spent a few years working at Smith Real Estate Services and then Red Rock Global, gaining valuable experience along the way, before joining Regent Partners in 2006. “My career highlight by far was the 3344 Peachtree/Sovereign building in Buckhead. Anybody who traverses the Peachtree Street corridor takes note of that building,” he said. “I was able to take a permanent role in the development and execution, which was helpful and rewarding given the complexity, the scale and the prominence of the building.”

The 50-story building includes 82 condos and a half-a-million square feet of office space plus ground-floor retail. Delivering 82, $2 million-dollar condos in 2008 was also one of his biggest career challenges. “Navigating through the recession of 2008 and 2009 required trying different things within the firm,” he said. “People who were specialists in one area or another ran the risk of having the demand for their skill reduced, which is career-threatening. I’m more of a generalist — I think of myself as a Swiss-army knife. I was able to do a lot of things, which was paramount in helping me stick around.”

His three degrees not only paid off in his widening his options at work, but also improved his odds of cheering on a winning sports team, too. “Virginia won the NCAA basketball championship in April, so I have to give a shout out to the Wahoos!” Mack said.

While finding the right career fit took some time, Mack said he was sold on Atlanta from day one. “I came to Atlanta in 1994 for an interview ironically during the first day of Freaknik,” he said. “I saw all the fun people were having Downtown and thought, ‘I don’t know what this is, but I am moving to Atlanta.’ I got my stuff and I never left.” Now, the city is also home to his family, including his wife Paula, daughter Meriwether and son Cambridge.

From Student to Teacher

Around the same time that Mack launched his career in development, he also began his membership with ULI Atlanta, joined the Young Leaders Group and participated in mentorship programs.  “I met some really outstanding people, like John Goff, John Robbins and John Whitaker,” he said. Then in 2009, Mack saw an announcement introducing the Center for Leadership (CFL). He applied and was accepted, although he didn’t fully know what to expect at the time.  “As the first class for a new program, my classmates and I tried to understand and experience the program in real time,” Mack said. “We had some really quality program days, but more importantly, were also able to form a bond with the 30-something people in the class who all gathered for a common purpose. That was the biggest takeaway for me: new friendships.”

CFL is organized around eight, full-day seminars consisting of presentations, panel discussions, property tours, small group activities which provide participants access to industry leaders, elected officials and recognized experts in real estate and land use. Overtime, Mack said the program has only gotten stronger and bigger in stature and reputation.  “I know there are a few others that can stake a claim, but I feel that the quality of the entire CFL experience makes it the preeminent leadership program in town,” Mack said.   As a result, the content of the program days has become more refined as well, with local luminaries like Egbert Perry, Arthur Blank and Andrew Young serving as previous guest speakers. The talent level of applicants has risen, too, as the requirement for real estate experience increasing from 5 years to 7 years.   “Applicants can now expect stiff competition when they apply. When we go through the selection, we try to make sure we have an appropriately diverse mix of skill sets that represents a true cross section of what we see in Atlanta,” he said. “There’s a good portion of people who may not get in the first time they apply, and there are people who apply two or three times before they are accepted. That’s a testament to the popularity of the program and the talent level of the individuals who have applied.”  Each day of the program has a different theme, and thanks to the high volume of projects underway across the region, Mack said this year’s class will also see a more diverse mosaic of the city.  “Luckily for us, the economy has gotten better, so the class is able to go and check out various areas of the city that are emerging, whether it be in Chamblee, on the Southside or on the Westside.”

During the course of the nine-month program, CFL participants have an opportunity to provide leadership on a critical Atlanta regional issue through a mini Technical Assistance Panel (mTAP). Working in teams, participants are responsible for sharing their expertise and advice to develop recommendations for a sponsor organization.

Mack recalls his mTAP program for his 2010 class involved an assessment of the superblock between Lenox Road, Peachtree Road and Tower Place Drive in Buckhead. “We tried to figure out how to best integrate pedestrian traffic with vehicular traffic, a MARTA rail station and MARTA bus stops,” he said. “We had a few suggestions for how to better integrate the pedestrians into the expansion and renovation of the Peachtree Road corridor and presented our ideas to MARTA.”

At the time, Mack and his classmates had to find the client, meet with them, determine the topic and request a fee from the client in return for recommendations. “Over time, this process seemed labor intensive for people who already had full-time jobs, so I suggested ULI as a whole could instead gather four or five groups that were interested in having the class work on an mTAP for them,” he added. “It’s morphed into a Shark Tank-like situation, where groups actually come and present to a CFL class and the class gets to pick which mTAPs or clients they’d like to pursue. There are typically 10 or so groups that apply and only six get chosen, so now there’s real competition to have a class take on a project.”

After their hard work on projects and quality time spent together, Mack says he still stays in touch with members of his original CFL class. “CFL is like a fraternity, but each class has its own unique bond with the people in the class. We have some people who have left the region, but for the most part, our class is still around,” he said. “I’ve had the opportunity to do business with a couple of them. As a matter of fact, I’m having lunch with one of them in 20 minutes.”

One of Mack’s goals as this year’s Chair is to help grow CFL’s alumni network. “We’ve had more than 300 alumni that have matriculated through the program and maybe 90% of them are still in town. We’re starting to see more people who have gone through the program taking leadership positions in all facets of architecture, development, public service and corporate management in our great city,” he said. “We want to build the alumni base with not only contact info, but programmatic activities to build upon the ultimate benefit of CFL: a strong network. It’s cool to see connections made in CFL bear fruit.”

Networking is certainly one of Mack’s strengths. In 2009, he founded the local organization Circle of Trust as another opportunity for individuals working in diverse areas of the commercial real estate industry to network, meet, mingle, hang out and have fun with others who have similar interests. The group has grown from the “Fighting Fifteen” back in 2009 to more than 4,000 members today.

With an already-packed calendar, what made 2020 the right time for Mack to take on the role of class Chair?
“I was persuaded by ULI Atlanta’s Executive Director Sarah Kirsch and realized the time was now to step up and do my part,” Mack said. “I’ve had friends go through the Chair role and they spoke highly of the experience, so I figure there is no better time than the present.”