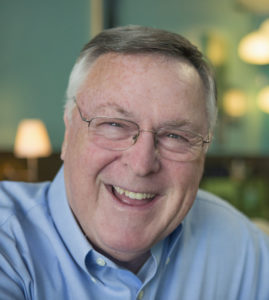 ULI Atlanta is pleased to announce that Bob Lupton will be honored with the Dan and Tally Sweat Community Leadership Award at the 25th Annual ULI Atlanta Awards for Excellence Dinner on September 12th at the Coca Cola Roxy Theater.

The Dan and Tally Sweat Community Leadership Award is given to an individual within the non-profit or public sector who has made a significant contribution to promoting responsible land use in the metropolitan Atlanta region.  The first Dan and Tally Sweat Awards was given to Renee Glover in 1998 and throughout the years has been awarded to Bernie Marcus, Andrew Young, Hattie Dorsey, Ed McBrayer, and most recently Keith Parker. Bob joins a notable list of public leaders who have made an outstanding contribution to the Atlanta community and in the creation of thriving communities.

Bob Lupton is an entrepreneur and urban activist.  Launching Focused Community Strategies (FCS) in 1978 with a mission to empower neighborhoods to thrive, Bob and his wife Peggy and their two sons sold their suburban home and moved into the urban core where they have lived and served as neighbors among those in need. Their life’s work has been the rebuilding of urban neighborhoods where families can flourish, and children can grow into healthy adults.

FCS has been partnering with under-resourced Atlanta neighborhoods for forty years starting with Grant Park, and then Ormewood Park, Summerhill, and East Lake. For the past sixteen years FCS has had the privilege of coming alongside residents of Historic South Atlanta to create a flourishing community through mixed-income housing, economic development, neighborhood engagement, and training and consulting. FCS has established a national reputation as a multi-faceted community development organization that creates healthy, sustainable, and restorative communities.

Lupton is the author of several books including the widely read, Toxic Charity, Theirs is the Kingdom, Renewing the City, and most recently Charity Detox which draws on his many decades of experience, and outlines how to structure programs that actually improve the quality of the life of the impoverished and disenfranchised. Throughout the years, Lupton has focused not just on development but the overall health of a community understanding the full impact it has on families, youth, and businesses.

In a time in Atlanta – and in cities across the country – when we are struggling with how to best approach community development and specifically investment without displacement, we can look no further than Bob Lupton for wisdom. As outlined in Toxic Charity, “…it is far better to enter the neighborhood as a learner than an initiator” as a philosophy of coming alongside communities and developing with communities. Further, Bob offers us a more wholistic view of development as empowerment. “Betterment does for others.  Development maintains the long view and looks to enable others to do for themselves.  Betterment improves conditions.  Development strengthens capacity.”

Bob has a Ph.D. in psychology from the University of Georgia. He serves as speaker, strategist, and inspirational advocate who works with community builders throughout the nation who seek to establish God’s Shalom in the city.