The Urban Land Institute (ULI) Atlanta celebrated its Silver Anniversary Awards for Excellence Dinner in grand fashion on Thursday, September 12 at the Coca-Cola Roxy Theater (at The Battery Atlanta).

This year’s project finalists were remarkable developments, consistent with the impactful projects from prior years.  They exceeded expectations of this year’s jury – demonstrating a passion for place, the environment and their communities. The recognition of these outstanding projects and leaders is a meaningful to thank those who take great risk and inspire our members and colleagues with outstanding examples of the ULI mission, to provides leadership in the responsible use of land and in creating and sustaining thriving communities worldwide. 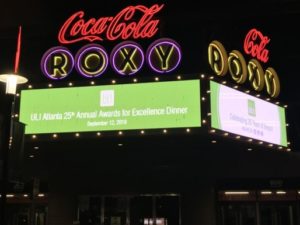 ULI Atlanta received approximately forty project nominations, ultimately awarding seven projects in the following development of excellence categories. One final award, the People’s Choice for the Public Realm was launched this year. Sixteen projects were nominated and went head to head in a ‘March Madness’ style voting bracket.  Of the 16 nominations, Alpharetta City Center emerged as the winner with over 900 votes.

The Project Winners and Videos

ULI Atlanta also recognized two leaders for their outstanding contributions to the Atlanta community and the real estate industry. Bob Lupton, an urban activist and founder of Focused Community Strategies (FCS) was honored with the Dan and Tally Sweat Community Leadership Award, and Charles L. “Chip” Davidson, III, the chairman, CEO and cofounder of The Brookdale Group, LLC was honored with the Frank Carter Community Achievement Award.

“ULI Atlanta is proud to celebrate Bob Lupton and Chip Davidson’s visionary leadership for creating thriving, urban communities,” said Sarah Kirsch, executive director of ULI Atlanta. “While much careful consideration goes into the selection of every ULI award recipient, the Sweat and Carter awards are especially reserved for the rare, high-caliber individuals who fully embody ULI’s mission and whose contributions are aligned with the awards’ esteemed, historical precedents. We are grateful for their work and that these luminaries call Atlanta home.”

The 25th anniversary dinner was co-chaired by Pam Sessions (Hedgewood Homes) and Brian Fielden (DLA Piper). It was made all the more special because it created an opportunity to look back at past award winners and the long legacy of member leadership in ULI. ULI Atlanta board chairs make an extraordinary commitment and an extraordinary con

tribution to the Urban Land Institute and to our region. Of the 15 individuals who have chaired ULI Atlanta since 1986, all but three were present for this anniversary celebration and serve as a reminder that excellence comes in the form of projects, of people, and in leadership of organizations such as ULI Atlanta.

As the esteemed program enters its 11th year, Mack reflects on his experience in the inaugural class and how the program has evolved.