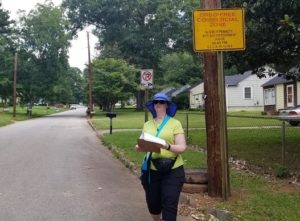 It was a day out of the office, but the task was quite different than my usual job as a commercial real estate attorney.  I took a walk, not in a park, but to school. The fitness watch clocked about 8 miles on a hot July day, yet it was worth the effort. I was among the leaders of a Technical Assistance Panel (TAP) for the Urban Land Institute – Atlanta (ULI Atlanta) as part of the nationwide 10-Minute Walk Campaign.  Launched in 2017, the 10-Minute Walk movement has the goal of ensuring that every person in the U.S. is within a 10-minute walk of a public park. Although developers are now often required to incorporate greenspace or parks into new developments, more established communities often lack such access. For this reason, the 10-Minute Walk Campaign is being reimagined in Atlanta as the Atlanta Community Schoolyards project. This joint effort between ULI Atlanta, the Trust for Public Land (TPL), Park Pride, and Atlanta Public Schools is transforming schoolyards into public spaces during non-school hours.

ULI Atlanta’s role in this project was to assess the walk routes of two Atlanta Public Schools – Dobbs Elementary and Kimberly Elementary in Southwest Atlanta.  This detailed analysis involved walking the streets with fellow ULI volunteers surrounding the schools to document, among other things, the quality of any existing sidewalks, whether any natural places to walk existed in areas without sidewalks, and whether the walk routes felt safe. 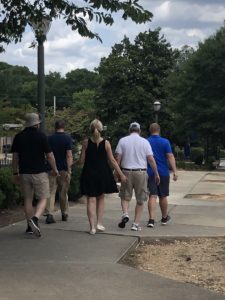 When people talk about unsafe streets in Atlanta, the mind immediately goes to crime.  Let me be clear that none of the streets were rated unsafe due to any criminal elements.  Rather, there was simply no safe place to walk along the streets receiving the low rating.  In some cases, the sidewalks were so deteriorated that they were virtually non-existent. In some places without sidewalks, the road shoulders had significant slopes or overgrowth, so the only place to walk was in the road.  Having to walk in the road, by itself, did not make the walk unsafe. It was walking in the road in close proximity to steady traffic, particularly oversized vehicles. The force of the air coming off of a MARTA bus passing close by feels like enough to knock you over.  What I could not get out of my head was that those big vehicles were way too close for comfort, even though I was walking in ideal visibility conditions. What would it be like if I were only 2 ½ feet tall walking in the rain or the dark? Or if I were in a wheelchair?

In the next two years of the project, 8 more schools will have the opportunity to transform their schoolyard into a vibrant community space and receive an assessment of the 10-minute walk to the school. Our hope is that key decision makers in Atlanta can find the resources to improve some of the walk routes that ULI rated as critical to help these new park spaces be successful and accessible.  Not only would this advance the goals of the Atlanta Community Schoolyards project and the 10-Minute Walk Campaign, but importantly would improve the walk to school for children living near the school who do not have the option of riding a bus or simply prefer the experience of walking.

I plan to continue working with this important project, because it demonstrates ULI’s core mission to advance leadership in the responsible use of land and building sustainable and thriving communities. What better way to enhance our communities than by making a walk safe, welcoming, comfortable, and accessible to all to a new park. 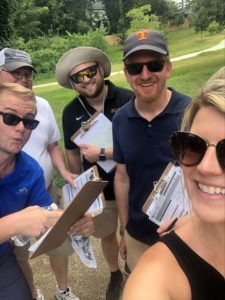 In the 2019 pilot year, ULI Atlanta members volunteered their time to provide technical assistance to two schools – Dobbs Elementary and Kimberly Elementary with the goal of how to make the walk more accessible to those living within a half-mile radius of these schools. Check out the completed reports here:

Janet L. Bozeman is a shareholder with Hyatt & Stubblefield, P.C.  Her law practice focuses on advising real estate developers on the legal infrastructure for planned communities, mixed-use and new urban communities, condominiums, destination resorts and other complex real estate developments.  She is a long-time member of the Urban Land Institute and is a past chair of its Technical Assistance Program (TAPs) Committee and current member of its Creative Development Council.

This article originally appeared in the February 3, 2020 edition of the Saporta Report

We spoke with Ong about her journey from Malaysia to Australia to Atlanta, her dedication to civic innovation and what keeps her moving